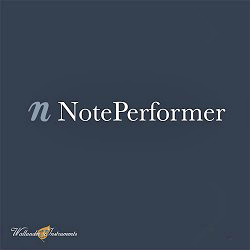 Super easy to use

Using NotePerformer is no more difficult than using the built-in sounds in Finale. You need no technical skills or previous experience in using sample libraries or producing music. In fact there isn´t even a separate interface, but you do all your work as usual in Finale. Instruments are assigned automatically, and can be controlled from the Finalemixer.

Built-in mixer for Finale and Dorico

When running NotePerformer in Finale or Dorico, NotePerformer now includes its own high-resolution mixer interface. The built-in mixer fills the same purpose as the built- in mixer in Sibelius, and is not accessible from Sibelius.

NotePerformer is the ideal tool for orchestrating and arranging music, as it responds to and articulates your music just like a real orchestra.  So the day you hand over your score to live musicians, you can feel confident that what you´ve written produces the sound you intended. And the players will thank you for providing an intuitively playable score. One which is written for musicians and not for computer playback.

Produce your own music

NotePerformer playback is so realistic, it´s easily mistaken for a live orchestra if that´s what you´re after.

Music created with NotePerformer can be published directly, or used for demonstration or audition purposes. Or as orchestral soundtracks for movies, games, apps, TV series, documentaries, theatre plays, advertisements etc.

I must say, I think this software is the future and I was very   excited to discover it! The expression of your instruments is   truely amazing. I believe these instruments mark the beginning of a new paradigm in virtual orchestration for professional composers.

I have had directors fall in love with mock-up brass solos I   have  done with WIVI because of their emontionla quality. Nor   bad for a plug-in, especially one with a ridiculously low CPU footprint. Adding to that the outstanding customer support, this is a product I enjoy using in every respect